A Handy Insight Into 3D Modeling For The Fashion Industry

By Abhishek DwivediJune 25, 2021 No Comments

If a decade back, I told you that you won’t need live models to conduct photoshoots, you probably won’t believe me, right? Well, it’s time to believe it. Technology has unquestionably reached new heights in the last few decades, and the fashion industry has embraced it with open arms. Solutions like 3D CAD embedded with advanced technologies like Artificial Intelligence have changed the game for fashion retailers all over the world. These software’s have not only brought a digital revolution in the fashion industry but also simplified and connected a lot of dots when it comes to the fashion supply chain. Now, one technology that takes this digital revolution even one step further is 3D Modeling. Computer-generated models have slowly sneaked in and become a major part of the fashion industry, these digital models have not only replaced the hassle of a traditional photoshoot but also, generated a ‘virtual influencer’ community within the fashion industry.

According to Barclay Ballard of ‘European CEO’, “Fashion brands are beginning to use digital influencers as part of their marketing campaigns, but these virtual supermodels seem to have as many critics as they do supporters.” These 3D virtual models, on one hand, have simplified the fashion supply chain and promoted diversity while on the other hand, gained an equal amount of skepticism and criticism. In this article, we will be discussing the two ends of the spectrum when it comes to 3D modeling, and also the benefits that this technology has brought to the fashion industry as a whole.

The Digitization Of Fashion With 3D Modeling Now, before we get into the digitization aspect of 3D solutions, we first need to understand the purpose of this technology. Basically, 3D modeling and 3D printing are two wings of the same technology. 3D modeling refers to creating a digital avatar of models wherein software’s are used to replace the need for a live model or photoshoots, on the other hand, 3D printing allows designers to create a virtual print of the product design which can be used for marketing or sampling purposes.

Historically speaking, it would take at least 2 weeks for any product to be photographed using live models, first, you’ll have to arrange models of different body types and ethnicities (which isn’t always possible), then you’ll have to organize a photoshoot in a studio setting, after which the images will have to be edited and finally go live. Now, imagine a technology that allows you to do all of that at a fraction of the price and within a few hours, that’s the benefit of 3D models. 3D solutions use AI-generated imagery to drape virtual garments on digital models of any size, ethnicity, or age group. In fact, brands like H&M have been using this technology for quite some time now, and are publicly known for using AI-generated models for a number of their summer collections. According to H&M’s Hacan Andersson, “It’s not a real body, it is completely virtual and made by the computer. We take pictures of the clothes on a doll that stands in the shop, and then create the human appearance with a program on a computer.” Now, when discussing this digital revolution of 3D rendering, we cannot leave out the biggest achievements of the industry so far, i.e. Shudu. First, let me introduce Shudu to you. Shudu has emerged as the biggest accomplishment in implementing the 3D modeling technology across the fashion runways of the world. Created by British fashion photographer, Cameron-James Wilson, Shudu is the world’s first and completely digitally created supermodel. She has an entire story behind her which started with her creator Wilson’s vision to create a Barbie-like perfection based on famous personalities like  Naomi Watts or Alex Wek. Her flawlessly beautiful skin, high cheekbones, and Barbie-like body have created quite the hype in the world of fashion. In fact, after the success of Shudu, Cameron created an entire all-digital modeling agency of his own called ‘The Digitals’.

You may be thinking, how will a computer-generated model compete with the queens of the modeling industry? Well, so far Shudu’s artificial existence hasn’t stopped her from appearing on major fashion magazine covers, international runways, or gaining a mass following on social media platforms. In fact, Shudu along with Margot and Zhi (also 3D animation models) have come to be known as Balmain’s “new virtual army”. Cameron’s vision has become so popular that these digital supermodels have become an indispensable part of online fashion runways across the fashion community. In an interview with ‘European CEO’, Cameron explained how he created Shudu using 3D design software, he further added that he started “from a blank mannequin and build the character by slowly changing and customising every part of the body and skin texture/tone. It’s definitely time-consuming, but I find it a lot of fun, so I can’t say it’s labour-intensive.” Now that’s the definition of genius.

Why Should You Care About 3D Modeling?

Now, moving on to the advantages of this technology, this can be answered in multiple layers. First and foremost, one of the biggest plus points of this technology is its use as a customization tool. Normally, the modifications and customization of a product is a very time-consuming task. Sampling a product in the early stages requires a ton of iterations when it comes to the fabric choice, the texture of a particular fabric, the colour variations, or the style, etc. To do this task traditionally, designers would have to make multiple physical samples of the product, which may or may gain customer approval. Now, a more practical way to do this process would be to use 3D product modeling, wherein, this entire process is shifted to digital customization. Hence, you not only save on material waste but also simplify the entire process.

As a matter of fact, fashion legend Karl Lagerfeld was also known to occasionally dabble with 3D modeling, and in the year 2015, he put his own spin on the classic Chanel suit using this technology. Next, this technology has also been really helpful in saving time and production costs by eliminating the need for traditional photoshoots. Traditionally, a fashion photoshoot has several different components like arranging for studio space, arranging models for different looks through an agency, booking a photographer, equipment costs, staging costs, etc. This entire process not only adds to the production cost but also comes with multiple uncertainties as well as time wastage. But, with 3D modeling, this entire process can be done digitally with as many customizations as the designer wants. They can choose whatever background, set, or models they want without worrying about cost or hassle.

Also, as mentioned before, this software helps to promote diversity and inclusion which has recently become a priority for brands all over the world. With digital models, brands don’t have to worry about gathering live models from different ethnic backgrounds or different body types. They can employ CGI models that can be available in all kinds of body types, ethnicities, age groups, etc. And this in turn helps the brand target a more diverse audience.

On a final note, we can say that technology adoption in the fashion industry is happening at a rather rapid pace. While it may be a difficult task to convince old school designers to use technological solutions like 3D product modeling, it still has slowly embedded itself into the fashion industry. And the rapidly growing business of AI-based content creation companies is proof of that. Of course, it cannot be denied that there’s still a lot of skepticism in mainstream fashion when it comes to CGI models or just technology adoption in general, but the endorsement of this technology by pioneers of the fashion world like Karl Lagerfeld and Francis Bitonti proves that it’s slowly making its mark in the industry. Let’s see where it takes us. 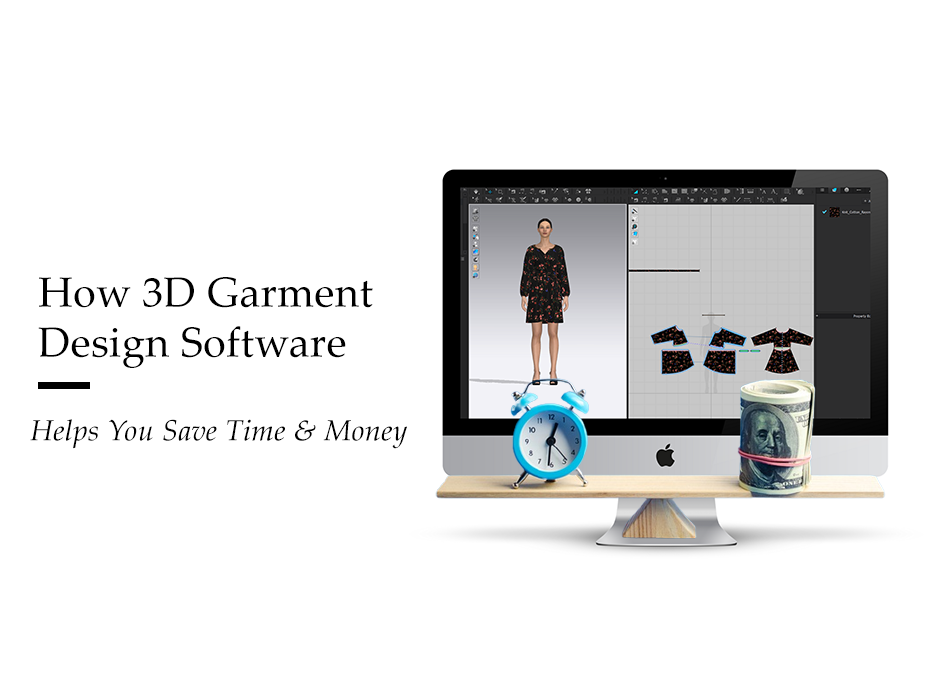 How 3D Garment Design Software Helps You Save Time & Money

How 3D Garment Design Software Helps You Save Time & Money